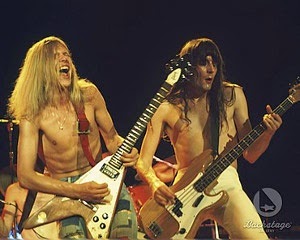 Michael Schenker is one of my favorite guitar players.  He has one of the most original sounds to his playing, and his solos are just beyond anyone's belief.  He is able to be precise, but at the same time he can be more emotional than just about any other guitarist.  Michael has been influential to so many guitarists; people include Randy Rhoads, Mike McCready, Adrian Smith, Vinnie Moore, etc.  he has definetely influenced the way I play guitar too, and I spend more time playing songs by him than anyone else.

Michael has been part of many different bands.  He was in Scorpions with his brother Rudolph for a brief amount of time.  He was in UFO for multiple occasions, and he is my favorite of all the guitarists in the band.  He has also been in his solo bands, The Michael Schenker Group, and McCauley Schenker Group.  All of these bands are very good, and all of them should be checked out