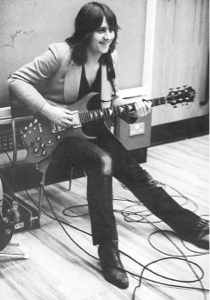 Paul Chapman was in the band UFO during the 80's and he took the band to a completely different level. He is one of the greatest guitarists I have ever heard.  He was famous for his band Lone Star, but he got a whole new audience when he joined UFO.  He took to over for Michael Schenker, and that is a huge task to take. He did an amazing job for sure. He was one the albums No Place To Run, The Wild The Willing And The Innocent, Mechanix, and Making Contact.  His style is a little bit flashier than Schenker, but he is also so full of feeling.  His guitar solo on "Anyday" is one of the most influential guitar parts for me. It is fantastic.  If I had to pick my favorite riff by him, I would choose "Dreaming" because that is such a rocking riff, and it is so catchy.  It was very sad that Chapman had to leave the band, and I wish he would've done more work with them.  If you want a guitar hero, then he is most definitely one for sure.  His material is so underrated, and you should definitely check it out.