The Most Amazing and Underrated Band of All Time 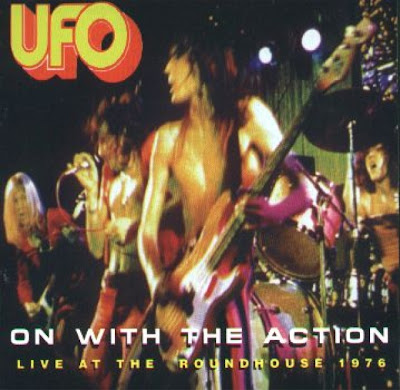 The first song I ever heard by UFO was "Lights Out." When I heard Phil Mogg's amazing vocals, and Michael Schenker's screaming guitar solos, I knew almost instantly that there was something special about this band.  The band has so much more than a great frontman and amazing former guitar player though;  they have the pleasure of knowing that they got to have one of the greatest bass players of all time Pete Way in the band for over 30 years.  Also, drummer Andy Parker is one of my favorites, because he has an amazing feel to his playing.  The band has also been able to pull off having a plethora of different guitar players in the band that started with Mick Bolton, and is currently Vinnie Moore.  When I first heard "Lights Out," I also noticed an amazing raw sound that not many bands can pull off. They didn't care about sounding like Led Zeppelin, or being what people wanted them to be.  They just wanted to make amazing songs, and most importantly, rock.
As I become an even more loyal fan to the band, I figure out that they are also one of the most consistent bands of all time.  I have listened to the first three albums with Mick Bolton, and they are all amazing albums that boast classics like "Flying," and "Come Away Melinda."  Every song and every album with Michael Schenker from the 1970's is completely amazing.  It has my favorite song of all time "Love To Love," and my favorite album of all time Strangers In The Night.  The songs that I have heard from the Paul "Tonka" Chapman era are also great.  My favorites in this era are "Chains Chains," and " Lonely Heart."

I really feel that UFO is probably the most underrated band of all time.  Even as they make new music, not many people know who they are.  I only discovered them a year ago because of Eddie Trunk on That Metal Show, and since then I have wished I had known the band longer.  I have tried to expose friends to the band, and even though they think the songs are good, they go back to their songs.  I am making this blog to make my favorite band UFO a little more open to the public, so they  can finally get their much deserved fame that hasn't ever been fully given to them.